"THE AIR MAILS OF NEW ZEALAND, Volume One, THE INTERNAL FLIGHTS" (1897-1955)
by DOUGLAS A. WALKER
This publication covers an exciting period of New Zealand's history with clarity and detailed accounts - creating an invaluable historical document for the aerophilatelist and historian alike.

"AIRMAILS OF NEW ZEALAND, Volume Two, THE OVERSEAS FLIGHTS 1928-1940"
by DOUGLAS A. WALKER
This book is an exhaustive encyclopedia of New Zealand's early overseas flights. Nothing has been left to the reader's imagination - a must for anyone interested in early New Zealand, whether it be to learn about the famous pioneer aviators of the day, the amazing machines of wood and fabric they flew or stamp issues and cachet types that were used on overseas mail at that time.

"AIRMAILS OF NEW ZEALAND, Volume Three, THE INTERNATIONAL AIRMAILS, 1940-1970" by ROBIN M. STARTUP
This is the second volume covering International airmails through to 1970. Once again, the historical data of this era of jet-powered flight has been treated with the importance it deserves in this super publication.

"THE NEW ZEALAND AIRMAIL CATALOGUE" third edition by JAMES A. STAPLETON - edited by MIKE SHAND
This is the latest catalogue published by the Society and it does not disappoint. Printed on quality gloss paper and being extremely easy to read, there are over one hundred and forty airmail covers displayed, spanning ninety-eight years - from 1911-2009. It contains everything the aerophilatelist, postal historian, or aviation enthusiast could wish for.

The Air Mail Society of New Zealand holds monthly meetings at its club rooms in Christchurch and postal auctions with all types of associated material on offer at various times; eg. flight covers, airmail stamps, special catchets & cancels, commemorative & anniversary covers, photos, books and more. There is also a very interesting and informative 'NZ Air Mail Newsletter' published monthly and free to members.
If you would like to know more, contact the Air Mail Society through their address below or visit their website.

INAUGURATION OF SERVICE FROM GREAT BARRIER ISLAND TO AUCKLAND

In 1897 a determined effort was made to exploit the mineral deposits of Great Barrier Island which is about 92 kms by air from Auckland, and a Mr. Smailes, one of the promoters of the mining company felt it would be a great convenience to inhabitants of the island if there were some more rapid means of communicating with the mainland than was provided by the weekly steamer service which was then in operation. He discussed the matter with Mr. Parkin, a well-known pigeon fancier of Auckland and eventually Mr. Parkin established a pigeon service between Great Barrier Island and Auckland.

The first message carried was dated May 14, 1897, and Mr. Parkin continued to operate the service until April 21, 1898, when he disposed of his interests to another pigeon fancier, Mr. S. Holden Howie, whose loft was at Newtown, Auckland. Only messages addressed to Auckland were accepted as it was considered that the trouble and expense of training birds to fly in the opposite direction would not be compensated by the extra business offering. A charge of 2/- (20 cents) per message was collected in cash and the addressee was required to acknowledge receipt of the message by signing a book. The pigeons were sent over to the island on the weekly steamer service and each one carried up to five messages, which were written on plain tissue paper known as flimsies, and were tied around the legs of the birds. Complete flimsies of any date from this service are of extreme rarity. 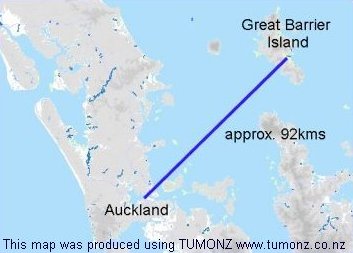 In September, 1898, Mr. H. Bolitho, who was a friend of Mr. Howie, became interested in the service and he suggested that a charge of a 1/- only be made for messages and that a special stamp be issued to simplify collection of the charge and popularise the service. Mr. Bolitho was authorised to arrange production of the stamps that were printed by the Observer Printing Works of Auckland. The first message to be franked with the special stamp, which was rectangular in format, was flown on November 19, 1898 from Okupu to Auckland. 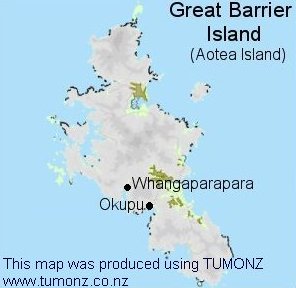 Following on the successful operation of the Original Great Barrier Pigeongram Service, a number of Auckland businessmen formed a rival company, the Great Barrier Pigeongram Agency and arrangements were made with a Mr. W.W. Fricker of Auckland to provide the birds necessary for the service. Mr. Fricker's loft was situated at Picton Street, Auckland, and the depot on the island was originally located at Okupu, but was later transferred to Whangaparapara.

The company issued distinctive triangular stamps in two values. The sixpenny value was printed in blue, whilst the one shilling value was issued in carmine red.

The flimsies issued by this company were more elaborate than those of the "Original Service" and measured eight inches by five and three-quarter inches. The one used for messages from Auckland had a printed heading reading "Great Barrier Pigeongram Agency. (Royal arms) PIGEON MAIL FORM. Auckland". The first flimsy for use from Great Barrier to Auckland was similar except that the word "Okupu" took the place of "Auckland". The first message carried by this service was sent on 16th. July, 1899. Like the earlier services, entire "flimsies" are quite rare.

In 1899 when a syndicate commenced mining operations on the principal island of the Hen & Chicken group, the "Original Great Barrier Island Service" established an agency on the island and accepted messages for Auckland.

Distinctive stamps were provided by overprinting a special printing of the pale greenish-blue stamps of the original Great Barrier Island service. The overprint "Marotiri Pigeongram" was in two lines in deep blue.
The stamp was first used on August 24, 1899, and postmarked copies on complete flimsies are of extreme rarity, as only a few of the total issue of 240 stamps were used. During 1899 specially printed flimsies were brought into use. 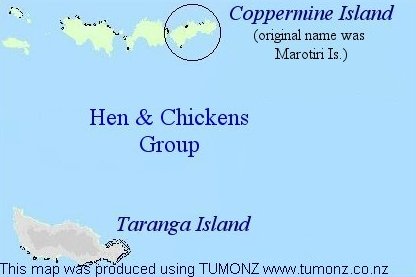 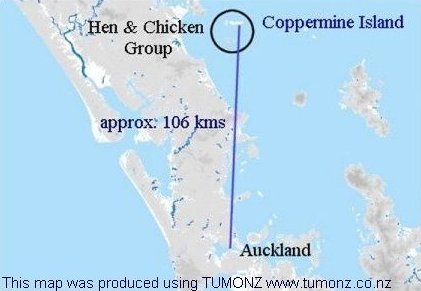 On January 29, 1900, an excursion trip was made to Great Barrier Island and messages were sent by pigeon from the ship to Auckland. The two companies provided pigeons for the conveyance of messages whilst the "Agency" issued a special flimsy inscribed "GREAT BARRIER PIGEONGRAM AGENCY FORM" at the top, while at the bottom there was printed the inscription "New Zealand Patriotic Fund. Excursion to Great Barrier Island, SS Mararoa, Jan.19th, 1900."

The flimsy used by the original company did not have any special heading, but an inscription "SS Mararoa, off Great Barrier 29th.Jan, 1900" was written in manuscript by the sender.

The Agency produced a special flimsy with the inscription SPECIAL SERVICE FROM GOVERNMENT HOUSE GROUNDS IN AID OF VETERANS HOME FUNDS printed beneath the heading.
The Agency also produced a special brown envelope for the dispatch of flimsies to addresses outside Auckland. 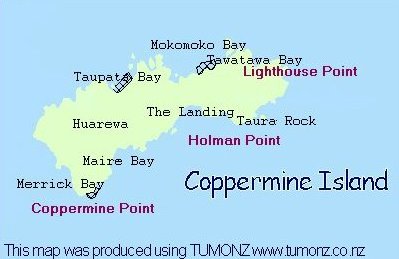 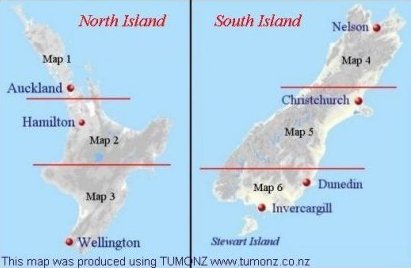 The information used on this site has been sourced
from the following three publications:

"AIRMAILS OF NEW ZEALAND, Volume Two,
THE OVERSEAS FLIGHTS
1928-1940" by DOUGLAS A. WALKER

ACKNOWLEDGEMENT TO THE PUBLISHER

Kind permission for their material to be used on this website
has been granted by: